Cape Canaveral… in Wales! British space industry reveals plans for base with aim of putting satellites into orbit within five years

Cape Canaveral… in Wales! British space industry reveals plans for base with aim of putting satellites into orbit within five years

Plans for a multi-million pound ‘space port’ in Britain were yesterday enthusiastically backed by the science minister David Willetts.

He hailed the ‘very exciting ambition’ to construct a mini UK Cape Canaveral as a launching base for space tourists and satellites into orbit within five years.

Possible locations are already being considered in the West Country, Wales and Scotland, with the plan for around one mission blasting off a month.

The portal, which would cost hundreds of millions of pounds, would be entirely privately funded but the government would be required to change existing regulations because of the dangers of space travel. 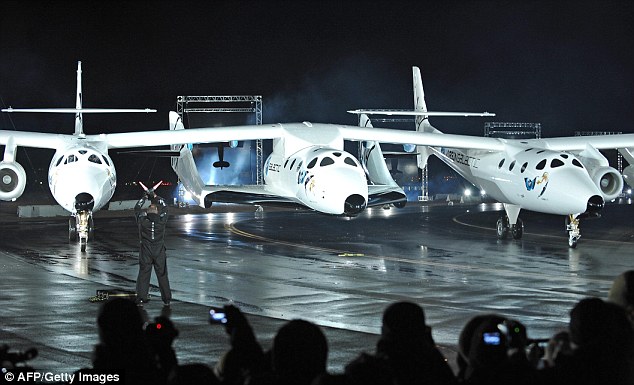 Plans: The new port could provide a European hub for Sir Richard Branson to base his Virgin Galactic space tourism programme

Mr Willets said he hoped it could provide a European hub for Sir Richard Branson to base his Virgin Galactic space tourism programme which intends to take passengers on suborbital joyrides for around £200,000 a time.

He said: ‘The space portal is a very exciting ambition.

‘It’s very important that Britain is a driving force for the growth area of low cost space travel.’

He said possible locations included a former RAF base in Scotland or a site nearer to a commercial centre.

Andy Green, Chairman of the UK Space Leadership Council said if built it would be near a coastal area.

He said: ‘For a space portal you need to be beside a long body of open water where you can’t annoy anybody.

‘You don’t want to be launching over land. It’s much safer and better for people to running out to the sea.

‘What we are asking the government is not to fund the space portal but to set a regulatory regime that allows it to be delivered.’ ‘if you’ve got crafts going up into space they need to be coordinated with the Civil Aviation Authority and everything else that’s going on in our already crowded air space.

‘You definitely need to be prepared for a higher risk profile than you have in civil aviation.

‘When you go up into space things can sometimes go wrong. That’s life.’

He added: ‘It’s important to understand that the space portal is not just for people going for jaunts into space.

‘It would enable us to put up a range of satellites which would make it easier for us to expand broadband coverage, for example.

‘These sort of things could be resolved by low cost access to space.’ ‘There are groups of people debating the possible location.

‘The belief is there is a commercial opportunity. We believe 2018 is feasible.’

He spoke at the central London launch of the UK Space Growth Action Plan, which warned: ‘Access to space is a barrier to growth for UK companies as well as a commercial opportunity.

‘The UK must take action now if it wishes to host commercial space flight.’

The UK Space Agency, CAA and two government departments are currently researching plans for safe commercial plane operations in the UK, and are due to report next summer.

He said the venture was ‘within a matter of months’ of being able to launch.

His rockets will be built like an airplane and should one day be able to travel to Australia in a couple of hours.

Only 500 people have ever been to space but Sir Richard said he will put the same number up in the first year.

Celebrities including Angelina Jolie and Russell Brand are among those said to have signed up.