To the moon? NASA passes the torch for space commercialization

To the moon? NASA passes the torch for space commercialization

NASA celebrates the successes of its commercial space program.

NASA’s chief closed out the space agency’s first campaign to commercialize spaceflight on Wednesday, marking a transition to more ambitious efforts to create new U.S. spaceships that could send astronauts into orbit — and perhaps back to the moon someday.

“We just finished taking the Olympic torch up to space last week, and getting it back down,” NASA Administrator Charles Bolden said during a televised ceremony at the agency’s Washington headquarters. “So in a way, this is passing another torch.”

Both companies are moving ahead with resupply missions under the terms of contracts with NASA worth a total of $3.5 billion. Orbital Sciences’ first launch covered by that contract is set for December, while SpaceX is due to send the Dragon on its next trip in February.

Bolden and other NASA officials said the lessons learned during COTS were being applied to the agency’s Commercial Crew Program, which supports the development of commercial spaceships for carrying humans into orbit. More than a billion dollars has already been committed for work on three prototype spaceships offered by SpaceX, the Boeing Co. and Sierra Nevada Corp. On Wednesday, NASA said it would announce its requirements for the final phase of development on Nov. 19. 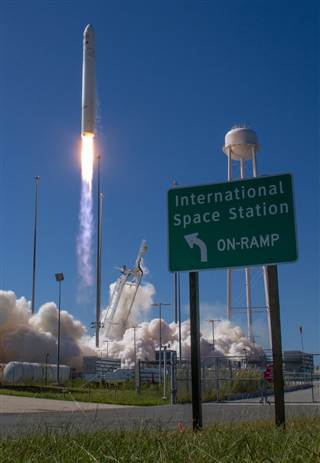 Bill Ingalls / NASA
Orbital Sciences’ Antares rocket lifts off from its Virginia launch pad on a demonstration flight to the International Space Station in September. The Antares-Cygnus mission marked the final chapter in the COTS saga.

“It’s now critically important to get full funding from Congress to keep us on track to begin these launches in 2017,” Bolden said.

Coincidentally, NASA’s inspector general released an audit on Wednesday saying that the Commercial Crew Program faced several obstacles that could keep it from meeting the 2017 goal — including a $1.1 billion budget gap between the agency’s requests and the money it’s received. Missing the target date would mean continued reliance on Russia for orbital crew transport, at a cost of more than $70 million per seat.

Keys to success
Alan Lindenmoyer, the manager of NASA’s Commercial Crew and Cargo Program, said COTS succeeded in part because of commercial competition and the fact that “NASA did not pay the full cost” of development.

SpaceX’s president and chief operating officer, Gwynne Shotwell, noted that her company received $396 million from NASA that went toward the $850 million total cost of creating the Falcon 9 and the Dragon. Without NASA’s help, SpaceX could not have created those spaceships as quickly as it did, Shotwell said.

The idea is that NASA benefits from a transport service that can be used for non-NASA space missions as well. SpaceX already has a multibillion-dollar manifest for commercial Falcon launches, and Orbital Sciences says it’s negotiating with several companies for future Antares missions.

“This is American ingenuity at its best, resulting in safe, reliable and cost-effective space transportation,” Lindenmoyer said.

The program paid out money only after pre-set development milestones were reached. Orbital, for example, reportedly received the final chunk of its $288 million allocation just this month for achieving its final COTS milestones. One of the original participants in the COTS program, Rocketplane Kistler, received $32 million from NASA for meeting early milestones, but had to bow out in 2007 when it couldn’t attract enough outside investment to satisfy the agency’s requirements. The company later filed for bankruptcy.

Commercialize the moon?
On Tuesday, Nevada-based Bigelow Aerospace publicized a NASA-commissioned report that called for extending the COTS model to lunar exploration and settlement. More than 40 years after the Apollo moonshots, NASA’s efforts to send astronauts back to the lunar surface have been stymied by the high price tag — but commercial ventures such as the Golden Spike Co. say they can turn a profit from low-cost trips to the moon.

He emphasized that no nation — whether it’s the United States or China — should assert sovereignty over lunar territory. That’s ruled out by the 1967 Outer Space Treaty. However, the treaty’s language on private property rights is more ambiguous. Bigelow is asking the U.S. government to work on a system for recognizing such rights.

“No one ‘anything’ should own the moon,” Bigelow told CNBC. “But yes, multiple entities, groups, individuals, yes, they should have the opportunity to own the moon.”

Lindenmoyer agreed that the COTS model for space commercialization could eventually go to the moon and beyond. In July, NASA sent its industry partners a request for ideas about how the model could be extended to meet the agency’s exploration goals.

“There were great responses — systems to go back and explore the moon, communication systems, propellant systems, launch systems,” Lindenmoyer said. “There’s all kinds of potential out there where the model can be used. And I think it can be used in a complementary manner: NASA develops the high-technology systems, and then the systems that are less complex can be turned over to industry.”

Extra credit: Orbital Sciences’ Culbertson announced that the next Cygnus craft heading for the space station would be named after C. Gordon Fullerton. Fullerton, who passed away in August, was an Apollo-era astronaut who was involved in the first air launches of Orbital Sciences’ Pegasus rocket. The C. Gordon Fullerton spaceship is due for launch atop an Antares rocket in December.