Russian android may take on outer space operations at ISS

Russian android may take on outer space operations at ISS

Russia has presented a new humanlike robot, which may be delivered to the International Space Station to perform 90 percent of risky operations in open space instead of cosmonauts.

The SAR- 401 prototype was revealed to journalists at the Yury Gagarin Cosmonaut Training Center in Moscow Region’s Star City on Wednesday.

The robot was developed in 2013 and is currently being tested terrestrially, Vyacheslav Sychkov, executive director of the Android Technics company said.

It’s vital for the android to achieve maximum precision in its every move, he added.

The operating principle for the robot is based on the machine repeating movements performed by a human operator.

“We’re working on two possible control scenarios: an emergency scenario when the robot is managed from Earth and routine operations when it’s managed from inside the ISS,” Sychkov is cited as saying by the ITAR-TASS news agency.

The developers plan to make the SAR- 401 compatible with the European Robotic Arm manipulator in the Russian segment of the ISS.

“The robot has a base point in order to attach it to the manipulator,” the Android Technics head explained.

The android will also be used as a communications system as it’s equipped with hardware capable of receiving messages from Earth and passing it to the station’s crew.

It’s not yet clear if the robot will be stored inside the ISS and then delivered to the work areas or be permanently housed on the station’s outer shell.

In case of the second scenario, the android will most likely be put in a special container, in which optimum temperature conditions will be maintained, Sychkov said. 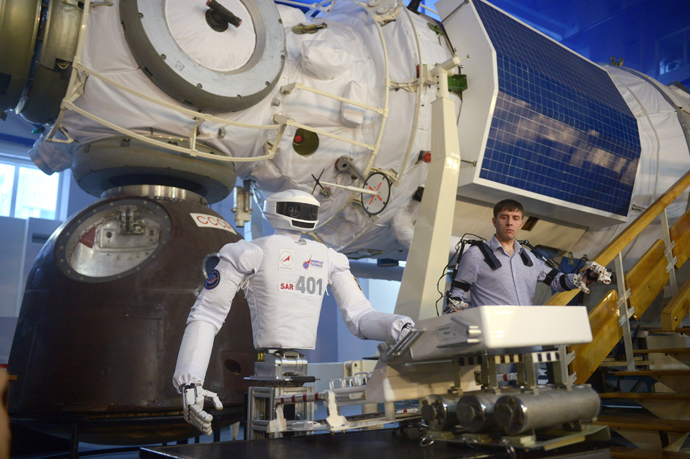 When asked about the cost of the SAR- 401 project, the Android Technics head replied that “the work isn’t yet completed, so it’s currently impossible to evaluate the whole program.”

But the Russian robot will be “a lot cheaper” than its American counterpart, already working at the ISS, he added.

The developers expect that in the future the android will perform over 90 percent of open space operations at the ISS.

The Cosmonaut Training Center plans to review a list of works on the station’s outer shell, currently performed by the cosmonauts, to determine which can be taken on by the SAR- 401.

“In general, its work will be replacement of equipment, checking and maintenance,” Sychkov explained.
Robots v. Humans

Meanwhile, the head of the Cosmonaut Training Center, Sergey Krikalyov, stressed that the androids won’t be able to replace people in space in the near future.

“A robot can never become a full substitute for a man. It’s interaction, not replacement we’re talking about,” he stressed.

According to Krikalyov, the newly presented robot may undergo a number of enhancements before it’ll be actually sent into space.

NASA’s Robonaut-2 was launched into orbit in 2011. The US android was designed to assist the crew inside the station as it lacks the kind of protection needed to exist in open space.

This August, the first Japanese robot astronaut arrived at the station. The main task of the small android, named Kirobo, is to see how humans and robots can interact in space as his capabilities include voice recognition and speech synthesis. 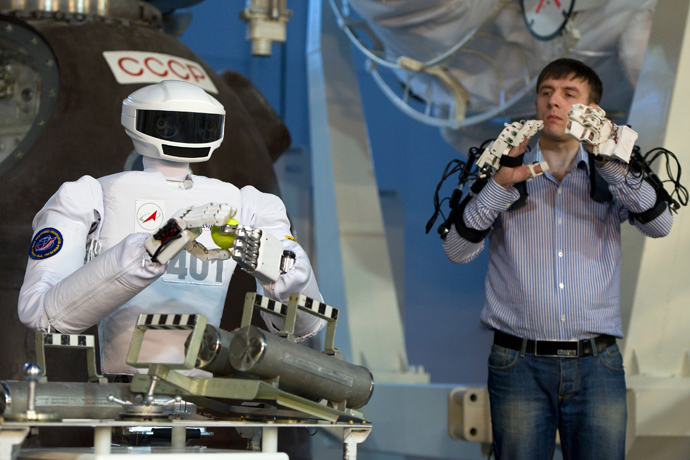 By: RT.com
To view the original article CLICK HERE