On Space Station’s Birthday, Questions About its Future

On Space Station’s Birthday, Questions About its Future

The movie “Gravity” may have taken some liberties with the physics of outer space, but one thing it nailed was the scope of the International Space Station.

In the film, Americans were introduced to a research laboratory that’s as large as a football field and has living space comparable to the interior of two Boeing 747 jetliners.

Home to six astronauts, the massive space station turns 15 on Wednesday, at a time of both triumph and uncertainty. The triumph comes because the station is beginning to produce tangible scientific results, helping NASA understand the threats posed by long-duration spaceflight and spurring the development of commercial spacecraft to ferry cargo and astronauts to and from orbit.

The uncertainty concerns the station’s fate, as a decision is likely to come next year about whether to de-orbit the station in 2020 or continue flying it until 2028.

“As the space station turns 15 years old it is a time for reflection – not of our past, but of our future,” said Kirk Shireman, the Johnson Space Center’s deputy director.

The station came into existence on Nov. 20, 1998, when the Russians launched a 42,600-pound module to a location 240 miles above the Earth’s surface. A few weeks later, space shuttle Endeavour, carrying the 25,000-pound Unity module, rendezvoused with the Russian equipment and connected the two modules. Astronauts have inhabited the station continuously since 2000.

With its construction completed in 2011, the station now weighs about 450 tons, equivalent to nearly 300 SUVs.

“It was an interesting engineering project for a long time, and it’s been an interesting project in international cooperation,” said John Shannon, Boeing’s program manager for the space station. “But now it’s got to prove its worth as a place for scientific research.”

NASA has turned to conducting scientific research on the orbiting platform only during the last couple of years.

U.S. crew members on the station work from about 7:30 in the morning to 7:30 in the evening, said Chris Cassidy, an astronaut who earlier this year returned from a six-month mission. Cassidy and other U.S. astronauts split their time between maintaining the station and conducting scientific research.

“One thing that’s hard to capture in time is just managing stuff,” he said. “You have to tend things quite carefully in space.”

There are signs the station is beginning to produce results.

In 2011, NASA designated the Center for the Advancement of Science in Space to manage the station’s scientific research. This has dramatically reduced the time it takes to design experiments to be conducted in a zero-gravity environment, and to have them flown into space. It can take as little as six months, and for researchers there are no launch costs. This has led to a flowering of research projects in space. 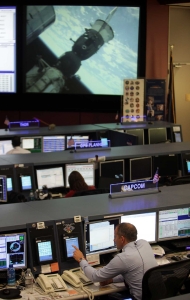 In an independent analysis of station science, published in the Washington Post, Indiana University political science professor William Bianco wrote that the station’s scientific payoff is both real and increasing.

“There is no guarantee that research on the ISS will cure cancer, end global warming, or earn their investigators a Nobel Prize,” Bianco wrote. “However, the data show that ISS research satisfies the basic conditions for good science: attracting outside researchers, engaging disciplinary debates, and generating publishable results.”

The station serves a number of scientific aims, by conducting experiments as well as studying the astronauts themselves.

In addition to bone loss, astronauts in space for a long time experience other health-related problems such as eyesight loss and weakened immune systems. Sometimes this research has benefits on Earth.

For example, many astronauts see a decline in their T cells, which are an important part of the body’s immune system. Several experiments underway on the station may help pinpoint the genetic causes for this, potentially leading to treatments for people on Earth for diseases which ravage immune systems.

On the station, NASA is also working out the kinks of all manner of life-support systems – such as water and oxygen recycling – that will be necessary when the agency attempts to send humans on long-duration spaceflight beyond the orbit of Earth’s moon.

Finally, the station provides a destination for private spacecraft being developed in the United States to ferry cargo and, perhaps as early as 2017, astronauts to the station.

“ISS does a lot of things for a lot of different people,” Boeing’s Shannon said.

The space agency has indicated it would like to determine the station’s fate sometime next year.

Boeing is close to completing an assessment of the station’s lifetime, the goal of which is to certify the structure for use for another 15 years.

“I feel extremely confident in saying it can last until 2028,” Shannon said.

The question, then, is one of budget.

NASA will be seeking direction from the president and Congress about the future of its space program, and whether its exploration budget can support both continuing the space station and developing the next generation of spacecraft and hardware.

The risk, of course, is that if NASA decides to abandon the station in 2020, it would have nothing left for astronauts to do in space – nowhere to go, and no spacecraft or rockets to take them there.

By: Eric Berger
To view the original article CLICK HERE