Retired astronaut Mark Kelly, who commanded the second-last space shuttle mission — and spent months at the side of his wife, Gabrielle Giffords, while the congresswoman recovered from a near-fatal shooting in 2011 — has joined a venture to send tourists 100,000 feet up to get their own space-style view of Earth.

“This is the next step,” Kelly told NBC News on Sunday.

Kelly will serve as director of crew operations for Arizona-based World View Enterprises, which is developing a high-altitude balloon and capsule that would take passengers to an altitude of roughly 30 kilometers (19 miles, or 100,000 feet) for an hours-long view of the curving Earth beneath the black sky of space. World View says its flight system could also be used for high-altitude research.

Subscale tests of the system are scheduled to begin next year, with commercial flights due to start as early as 2016. World View said it will start taking flight reservations on Wednesday, at $75,000 a ticket.

From space to near-space
Kelly said that he’s known two of World View’s founders, Taber MacCallum and Jane Poynter, for years. “I met Jane at the same time I met Gabby,” he said. MacCallum and Poynter, who are also among the founders of Paragon Space Development Corp., discussed the balloon business plan with Kelly during Giffords’ convalescence.

Giffords left Congress last year, and the couple now lives in Arizona. Kelly said Giffords isn’t involved in the World View venture but supports the idea. “She’s 100 percent behind my involvement,” he said. 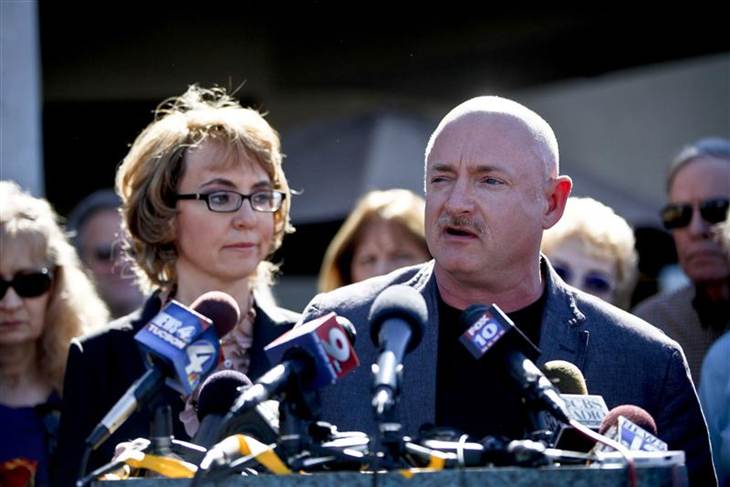 Kelly has 25 years of flying experience, as a Navy test pilot and combat aviator as well as a NASA astronaut. “I’m going to bring that experience to World View,” he said. He’ll be involved in the design and testing of the balloon platform as well as crew selection. So will he be the first to fly the craft? “That is a possibility,” he told NBC News. “It could be me, it could be somebody else that we recruit.”

The astronaut repeatedly referred to World View’s balloon platform as a spacecraft — even though it’s not designed to go beyond the boundary line of outer space, which is generally defined as 100 kilometers (62 miles) in altitude. Rather, it’s designed to fly almost three times as high as a commercial jet’s typical cruising altitude of 36,000 feet (11 kilometers). World View’s aim is to give customers a space-like experience at a lower cost and a lower level of risk than what’s typically associated with rocket-powered spaceflight.

Sharing the experience
Poynter noted that high-altitude ballooning is a well-understood technology. “All of the component parts have been flown before,” she said. The key will be “figuring out how to make it routine,” with the objective of conducting near-space flights on a weekly basis, she said.

Kelly said his own experiences in space were among the factors that led him to get involved with World View.

“To see the Earth as a round ball from the blackness of space. To be able to see what a sunrise and sunset looks like above the atmosphere. To see what the stars look like above the atmosphere. It is like nothing I’ve ever experienced before. … For some people, it’ll be probably one of the best experiences of their lives. I can guarantee you that.”