Developing a Fax Machine to Copy Life on Mars

Developing a Fax Machine to Copy Life on Mars

MOJAVE NATIONAL PRESERVE, Calif. — J. Craig Venter, the maverick scientist, is looking for a new world to conquer — Mars. He wants to detect life on Mars and bring it to Earth using a device called a digital biological converter, or biological teleporter.

Although the idea conjures up “Star Trek,” the analogy is not exact. The transporter on that program actually moves Captain Kirk from one location to another. Dr. Venter’s machine would merely create a copy of an organism from a distant location — more like a biological fax machine.

Still, Dr. Venter, known for his early sequencing of the human genome and for his bold proclamations, predicts the biological converter will be his next innovation and will be useful on Earth well before it could ever be deployed on the red planet.

The idea behind it, not original to him, is that the genetic code that governs life can be stored in a computer and transmitted just like any other information.

Dr. Venter’s system would determine the sequence of the DNA units in an organism’s genome and transmit that information electronically. At the distant location, the genome would be synthesized — or chemically recreated — inserted into what amounts to a blank cell, and “booted up,” as Mr. Venter puts it. In other words, the inserted DNA would take command of the cell and recreate a copy of the original organism.

To test some ideas, he and a small team of scientists from his company and from NASA spent the weekend here in the Mojave Desert, the closest stand-in they could find for the dry surface of Mars.

The biological fax is not as far-fetched as it seems. DNA sequencing and DNA synthesis are rapidly becoming faster and cheaper. For now, however, synthesizing an organism’s entire genome is still generally too difficult. So the system will first be used to remotely clone individual genes, or perhaps viruses. Single-celled organisms like bacteria might come later. More complex creatures, earthly or Martian, will probably never be possible.

Dr. Venter’s company, Synthetic Genomics, and his namesake nonprofit research institute have already used the technology to help develop an experimental vaccine for the H7N9 bird flu with the drug maker Novartis.

Typically, when a new strain of flu virus appears, scientists must transport it to labs, which can spend weeks perfecting a strain that can be grown in eggs or animal cells to make vaccine.

But when H7N9 appeared in China in February, its genome was sequenced by scientists there and made publicly available. Within days, Dr. Venter’s team had synthesized the two main genes and used them to make a vaccine strain, without having to wait for the virus to arrive from China.

Dr. Venter said Synthetic Genomics would start selling a machine next year that would automate the synthesis of genes by stringing small pieces of DNA together to make larger ones.

Eventually, he said, “we’ll have a small box like a printer attached to your computer.” A person with a bacterial infection might be sent the code to recreate a virus intended to kill that specific bacterium.

“We can send an antibiotic as an email,” said Dr. Venter, who has outlined his ideas in a new book, “Life at the Speed of Light: From the Double Helix to the Dawn of Digital Life.” Proteins might also be made, so that diabetics, for instance, could “download insulin from the Internet.”

Dr. Venter, 67, has many scientific achievements — though critics deride some of them as stunts — but has had less success converting his ideas into successful businesses.

A previous company, Celera Genomics, raced the federally funded Human Genome Project to determine the complete DNA sequence in human chromosomes. The race was declared a tie in 2000, but Celera could not sustain a business selling the genomic information.

A deal worth up to $600 million that Synthetic Genomics made with Exxon Mobil in 2009 to produce biofuels using algae has been scaled back to a research project.

In 2010, Dr. Venter made headlines by creating what some considered the first man-made life. His team synthesized the genome of one species of bacterium and transplanted it into a slightly different species. The transplanted DNA took command of its new host cell, which then multiplied, passing on the synthetic genome.

Critics said Dr. Venter had not really created life, just copied it. Dr. Venter said in the interview that while he did not create life from scratch, he had created a new type of life.

“DNA is the software of life, and to get new life, you just have to change the software,” he said.

Dr. Venter said his team was designing a genome that was not a copy of an existing one and trying to insert it into a host cell. “It’s not alive yet,” he said. “We’re close.” 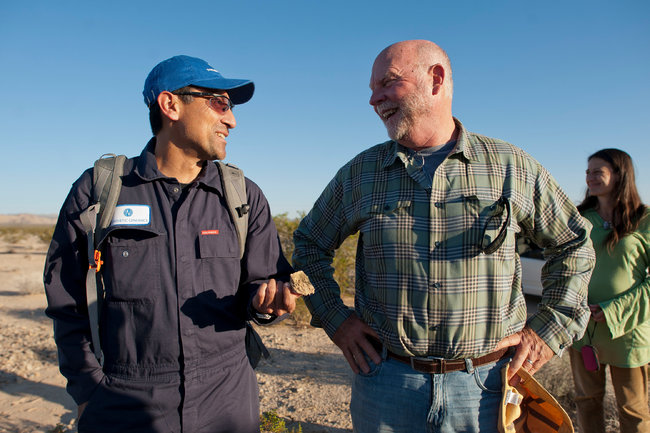 George Church, a professor of genetics at Harvard Medical School, said there was nothing unique about Dr. Venter’s work so far because others had already synthesized viruses based on DNA sequence information available on the Internet.

“Most people in the past didn’t call it teleportation,” he said, “but if you want to, fine.”

Space exploration is one area where the teleporter might be especially useful. It would be extremely costly and time-consuming to send a medicine physically to a colonist on another planet who becomes sick. And it would be difficult to send a sample from Mars back to Earth.

That is why Dr. Venter’s team was camped here this weekend, about 200 miles northeast of Los Angeles. The mission was to find microbial life in the desert, determine its sequence and transmit it to Synthetic Genomics’ headquarters in San Diego.

This dry run was far from the automated process that would be needed on Mars. Two scientists spent hours Friday in a bus filled with laboratory equipment, carefully scraping green microbes off rocks and preparing their DNA for sampling. The sequencing, done on a desktop machine in the bus, took 26 hours.

Chris McKay, a scientist at NASA’s Ames Research Center who is working on the project, said the bus would have to be shrunk to a shoe box to make it feasible for a Mars mission, which would take many years and dollars. “By the time we get to Mars, we will have spent $500 million on that shoe box,” he said.

But sequencing machines are rapidly becoming smaller. A team at Harvard and M.I.T. is hoping to have a sequencer ready for use in a Mars mission departing in 2020.

Of course, all this assumes there is life on Mars to begin with and that it is based on DNA.

But that can be left for another day. Dr. Venter is known for combining business with pleasure, such as when he sailed his yacht around the world to collect ocean life for sequencing. He arrived here Friday in a pickup truck hauling three motorcycles and some libations.

After touring a site on Friday from which his scientists had collected rocks on which green cyanobacteria were growing, Dr. Venter declared: “We’ve had the quartz. Now, let’s get a pint.”

Beam us up, Craig!