The International Space Station celebrates its 15th birthday Wednesday, marking the day in 1998 when a Russian rocket lifted the first piece of what is now the largest manmade structure ever built in space.

The launch of the module named Zarya (“Sunrise” in Russian) kicked off an unprecedented international undertaking to build the astronaut outpost one piece at a time. Five different space agencies representing 15 countries contributed to the project, and by 2000, rotating crews of spaceflyers were — and still are — living on the $100 billion International Space Station.

Today, the space station is about the size of a football field with roughly the same amount of livable space as a six-bedroom house. It ranks second only to the moon among bright objects in the night sky.

The module that started it all, Zarya, also known as the Functional Cargo Block (FGB), is mostly used for storage now. But initially it was intended to serve as a central node of orientation control, communications and electrical power as other parts of the space station were added, according to NASA. 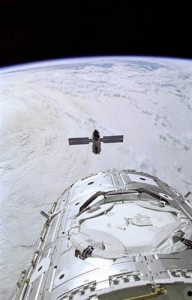 The Space Shuttle Endeavour prepares to rendezvous with the FGB.

“We were in the control center in Houston that night to watch Zarya launch, along with a good number of people from the program,” said Bill Bastedo, who was the launch package manager for the next piece of the space station, the U.S.-built module Unity, in a statement.

“It was actually, for us, exciting to have Zarya on orbit so we could get our chance to execute our mission,” Bastedo, now senior vice president of Booz Allen Hamilton, said in a statement.

Two weeks after Zarya was carried into orbit, on Dec. 4, 1998, NASA’s space shuttle Endeavour launched Unity, sometimes called Node 1, during the STS-88 mission, and the two modules were linked together.

“I was very confident in our ability to dock the two,” Bastedo added in a statement from NASA. “I was most worried about making sure we could verify that Unity, the mating adaptors and Zarya all worked as a system together and we could safely leave it on orbit, because it was going to be about a six-month gap until the next flight. It turns out it was a lot of worry about nothing, because it almost went flawlessly.”

Less than two years later, on Oct. 31, 2000, the first crew to live inside the International Space Station launched on a Russian Soyuz capsule. Expedition 1 consisted of NASA astronaut Bill Shepherd and Russian cosmonauts Sergei Krikalev and Yuri Gidzenko. The three spaceflyers climbed on board the station on Nov. 2, 2000, kicking off humanity’s continuous presence in space. 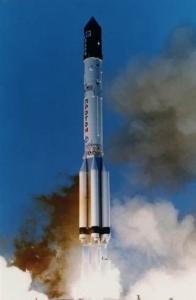 “It’s hard to believe it’s been 15 years since we joined Unity and Zarya in orbit and laid the cornerstone for the International Space Station,”said Kennedy Space Center Director Bob Cabana, who was the STS-88 mission’s commander. He described the outpost as ” an engineering marvel and a testament to what we can accomplish when we all work together.”

“I think one of the most enduring legacies will be the international cooperation we have achieved in building and operating it,” Cabana said in a statement from NASA. “It has provided us the framework for how we will move forward as we explore beyond our home planet, not as explorers from any one country, but as explorers from planet Earth. We have seen great results in areas such as biotechnology, Earth and space sciences, human research, the physical sciences and technology being accomplished in this remarkable laboratory in space.”