Incredible Technology: How to Mine Water on Mars

Incredible Technology: How to Mine Water on Mars

The bone-dry desert of present-day Mars may seem like the last place you would look for water, but the Red Planet actually contains a wealth of water locked up in ice.

Evidence that Mars once supported liquid water has been mounting for years, and exploratory missions have found that water ice still exists on the planet’s poles and just beneath its dusty surface. Accessing that water could require digging it up and baking it in an oven, or beaming microwaves at the soil and extracting the water vapor. Yet no mission has attempted to extract water on Mars or any celestial body beyond Earth in appreciable quantities.

Now, the Netherlands-based organization Mars One, which wants to establish a permanent human settlement on the Red Planet, is planning to send an unmanned lander to Mars in 2018 that would carry an experiment to demonstrate that water extraction is possible. Mined water could be used for drinking, growing plants or creating fuel. 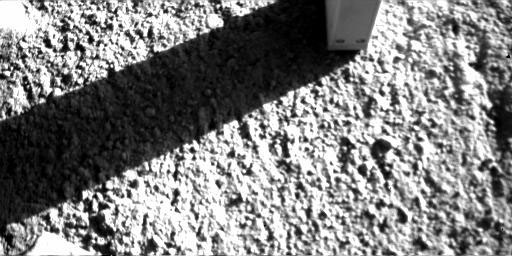 NASA’s Phoenix Mars Lander inserted the four needles of its thermal and conductivity probe into Martian soil during the 98th Martian day, or sol, of the mission and left it in place until Sol 99 (Sept. 4, 2008). The Robotic Arm Camera on Phoenix took this image on the morning of Sol 99 while the probe’s needles were in the ground. The science team informally named this soil target “Gandalf.”

[on Mars], how do we validate those technologies are appropriate?”

H2O on the Red Planet

Numerous studies have suggested that water exists on Mars, based on evidence from Mars orbiters and

rovers such as outflow channels, ancient lakebeds, and surface rocks and minerals that could only have formed in the presence of liquid water.

Today, Mars is too frigid, and its atmospheric pressure is too low, to support liquid water on its surface — except for very short spans of time at low altitudes — but frozen water can be found in the planet’s ice caps and beneath the soil surface.

NASA’s Phoenix lander detected water ice at its landing site in 2008. The spacecraft dug up chunks of soil, and its onboard mass spectrometer found traces of water vapor when the sample was heated above freezing. More recently, NASA’s Curiosity rover detected water molecules in soil samples analyzed by its SAM (Sample Analysis at Mars) instruments, suggesting Martian soil contains about two pints of water per cubic foot of soil. 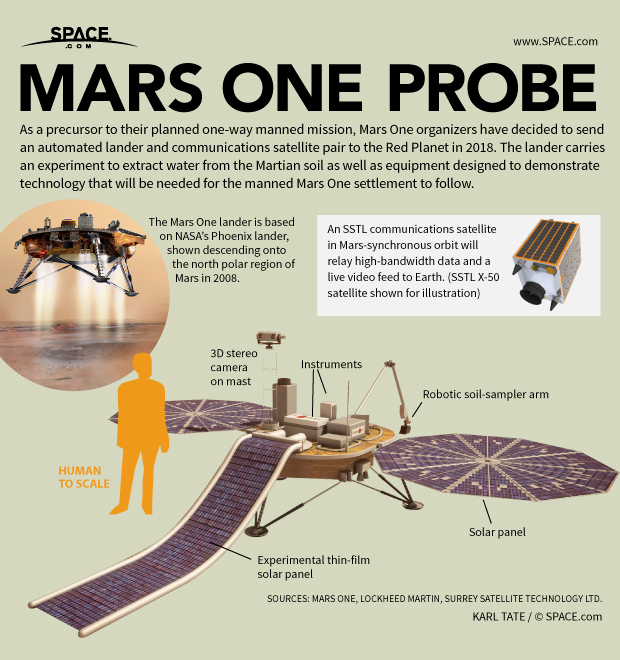 Prior to their attempt to found a human colony on Mars, the Mars One group plans an unmanned scouting expedition.

The most obvious method for extracting water would be to dig up the frozen soil and bake it in an oven until the water vaporizes. But there’s another method that could be more efficient and require less digging.

“For mining water off Mars, you want to get a high quantity of water,” said Edwin Ethridge, a senior ISRU (In-Situ Resource Utilization) scientist and retired NASA consultant. Ethridge and his colleagues have studied water extraction in simulated lunar and Martian environments using microwave beams.

In the lunar experiment, Ethridge and William Kaukler of the University of Alabama in Huntsville used a conventional kitchenmicrowave oven to “cook” some simulated lunar regolith, the layer of loose soil and rocks found on the moon’s surface. The heat vaporized the frozen water, which was then collected and condensed on a chilled plate.

Water absorbs microwaves (short electromagnetic waves) very well, but ice does not, so the microwave beams actually heat up the rock, which heats the ice upon contact, Kaukler explained.

The microwave technique would work pretty much the same way on Mars, Ethridge told SPACE.com. The main advantage over excavating methods is that it requires less digging — though, depending on how deep the water is, you might need to drill holes down and beam microwaves through them, he said.

Of course, Mars isn’t the only place scientists hope to find and mine water; the moon and asteroids are also prime targets.

“Water enables so many things. If we’re going to go out into the solar system, we’re going to have to use the resources we find at the destination,” Bill Larson, the NASA scientist who oversees the program to use substances found on other worlds, said in a statement.

NASA’s Lunar Reconnaissance Orbiter (LRO) sensed water on the moon remotely, and the Lunar Crater Observation and Sensing Satellite (LCROSS) that impacted the moon in 2009 found direct evidence of water ice and vapor in a perpetually shadowed lunar crater.

Now, NASA and the Canadian Space Agency are developing a new lunar rover called Regolith and Environment Science and Oxygen and Lunar Volatile Extraction, or RESOLVE, which they hope to send to the moon this decade. RESOLVE, which was recently tested on lava beds in Hawaii, would be able to drill into the moon’s surface and heat up the material to measure the amount of water vapor inside.

By: Tanya Lewis
To view the original article CLICK HERE