The new pump was successfully restarted by flight controllers at NASA’s Johnson Space Center last night and a NASA statement confirmed the new pump was working properly. The pump is part of the Station’s two external cooling loops which circulate ammonia outside the orbiting outpost to keep both internal and external equipment cool.

The Christmas Eve spacewalk lasted 7 hours 30 minutes, and followed on from a 5 hour 28 minute EVA (extra-vehicular activity) by Mastracchio and Hopkins on December 22 when they removed the faulty pump.

The spacewalks are a reminder of the challenges of maintaining an orbiting complex and the bravery of the astronauts who live in space orbiting the Earth every 90 minutes — both inside and outside — the ISS, travelling at over 27,500 kilometres per hour. 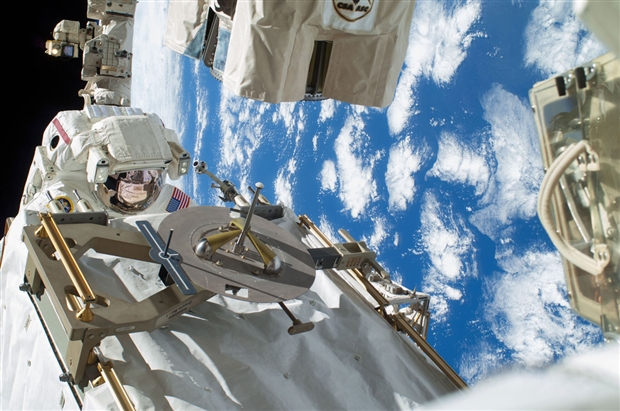 Living aboard the station with NASA astronauts Rick Mastracchio and Michael Hopkins are four other spacemen who have made the journey from Earth – Russian cosmonauts Oleg Kotov, Sergey Ryazanskiy and Mikhail Tyurin and Japan Aerospace Exploration Agency (JAXA) astronaut Koichi Wakata.

Three of the crew members — Rick Mastracchio, Koichi Wakata and Mikhail Tyurin — arrived at the station in November carrying the Olympic torch as part of the build-up to the 2014 Sochi Winter Olympics. Whilst the torch will not be lit during its time in space for safety reasons, the ISS itself lights up the night sky, freely traversing state boundaries as it orbits the planet. It is a beacon of international co-operation, a symbol of what can be achieved by vision, political will and global science.

The station celebrated its fifteenth birthday this year. The first module of the Station, Zarya, was put into orbit on November 20, 1998. It was joined a few weeks later when the Space Shuttle delivered Unity, the Station’s second module, which was attached to Zarya on December 6. The first crew to live on the Station, Expedition 1, arrived on November 2, 2000. It has been continuously occupied since, a demonstration of how nation states which are oceans apart — physically and politically — can combine to build a new world in space. This bright light you can see flying through the night sky reflects both the Sun’s light and the unity that can be achieved by the exploration of space.

Exploring space brings many direct benefits, increasing our scientific knowledge and delivering services such as mobile telecommunications that benefit consumers every day on Earth. There are also satellites which, in effect, measure the health of the planet and can guide decisions on future policies. Beyond the tangible results there exists the intangible promise of change that could make life better for Earth’s inhabitants.

Space is for everyone, there are no boundaries and notions of state sovereignty do not exist – a fundamental principle of international space law. As the space station passes in the night sky this Christmas it is a guiding light for what could be achieved in the centuries ahead when nation states combine political will, science and economics – the foundations for an Earth government to manage space exploration and Earth for the benefit of all mankind.

By: Charles Black
To view the original article CLICK HERE