People along the east coast of the United States should get a great opportunity to see a rocket launch from their own backyards this week.

Weather permitting, observers from Massachusetts to the Carolinas could see an International Space Station-bound Cygnus spacecraft launch atop a two-stage Antares rocket Thursday (Dec. 19) night. The Orbital Sciences Corp. developed spacecraft and rocket are scheduled to lift off from pad 0A at the Mid-Atlantic Regional Spaceport (MARS) on Wallops Island, Va., at 9:19 p.m. EST (0219 Dec. 20 GMT).

This flight — called Cygnus CRS Orb-1 — is the first official resupply mission to the space station launched by Orbital Sciences under a $1.9 billion contract for eight cargo runs to the orbiting outpost with NASA. A Cygnus spacecraft successfully docked with the space station earlier this year during a test run.

Cygnus’ launch was scheduled for Wednesday (Dec. 18), however, a problem onboard the station forced Orbital Sciences to push the launch at least 24 hours to Thursday. NASA engineers still need to fix an issue affecting the vital cooling system responsible for keeping equipment on the orbiting laboratory cool before Cygnus will be able to dock with the station.

If you don’t have the chance to see the launch in person, you can watch it live online. You can watch live coverage of the Cygnus launch starting at 9 p.m. EST (0200 Dec. 20 GMT) on SPACE.com via NASA TV.

Views of the rocket launch will be different depending on where you live on the East Coast. The further away you are from the launch site, the closer to the horizon the rocket will be. As a reference, your clenched fist held at arm’s length is roughly 10 degrees in width.

Antares’ launch will be visible along the East Coast by virtue of the light emitted from its two stages. The first stage uses kerosene and liquid oxygen as propellants, powering two Aerojet AJ-26 engines, which are modified Russian-built NK-33 engines.

Antares should appear as a bright, moving star. Observers who use binoculars might be able to see a tiny V-shaped contrail.Because the first stage of Antares is liquid fueled, its ascent is slowerthan the Minotaur rockets that have launched from Wallops in the past few months. Antares will jettison its first stage once it has spent all its fuel, about 135 seconds after launch. This harmlessly breaks up in the atmosphere and falls into the Atlantic Ocean.

Then comes a coasting phase, which lasts about 212 seconds after the first stage shutdown; the rocket will be invisible during this time frame, followed by ignition of the second stage.

The second stage is a solid-fuel rocket, the Castor 30B. This second stage, along with the Cygnus spacecraft, is put into a low Earth orbit. Once it separates from the second stage, Cygnus will then use its own engines to continue on its mission to the space station.

The second stage will appear farther downrange and at a lower elevation than where the first stage shutdown appeared. The trajectory appears to dip back toward Earth as the rocket moves further away from the observer and disappears beyond the horizon. The rocket, of course, is not returning to Earth — it is continuing its ascent, speeding higher and faster toward space. 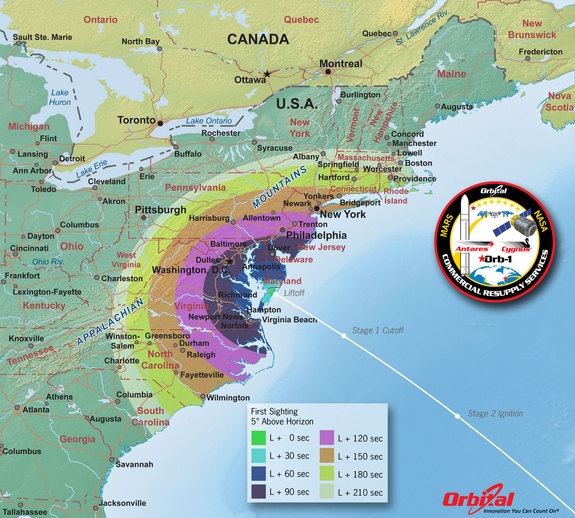 This map shows the rough time at which you can first expect to see Antares after it is launched.

Where to concentrate your gaze

Public viewing of the launch will be available at the NASA Visitor Center at Wallops. For more information about the Visitors Center, to include directions, see:

Android users have the option of downloading the new “What’s Up at Wallops” app, which contains information on the launch as well as a compass showing the precise direction for launch viewing. The app is available for download at:  http://go.nasa.gov/17veCYT

By: Joe Rao
To view the original article CLICK HERE