A Quiet Trip to the Ozone Hole

A Quiet Trip to the Ozone Hole

BEND, Ore. — It might be the weirdest part of the atmosphere, 15 miles above the polar regions, where vast stratospheric clouds of nitric acid and water vapor shimmer in iridescent pink while human-made chemicals play havoc with the ozone layer.

Scientists long to study the stratosphere at close range. But this is almost the edge of space, far too high for a conventional airplane in level flight.

How to get there? In a glider.

Without the weight of engines or fuel, a glider can be lifted by natural atmospheric phenomena, engineers say. So a team of scientists, aviation buffs and entrepreneurs is building a two-seat sailplane designed to withstand the peculiar hazards of stratospheric flight. The journey is scheduled for August 2015.

The glider will be shipped by freighter to El Calafate, Argentina, where winds from the Pacific Ocean are deflected by the Andes Mountains to create a standing wave, like the waves of water that form over rocks in a mountain stream, with updrafts of 30 feet per second.

“These mountain waves get so steep and energetic, they turn into white water,” said Edward J. Warnock, an aerospace engineer who is chief executive of the Perlan Project, the nonprofit organization that is building the glider, Perlan II.

A single-engine plane, probably a crop duster, will tow the glider to meet these waves, at about 10,000 feet. Where the waves weaken, at about 60,000 feet, the glider is supposed to intercept another phenomenon, the polar vortex — circulating winds that act like a giant cyclone during the austral winter, delivering a strong uplift. If it can catch that current, the glider will soar still higher, into the Perlan Clouds, and higher, into the ozone hole, where the chemical reactions that disrupt the ozone layer take place. (Perlan is the Icelandic word for “pearl,” describing the clouds’ sunlit glow.) 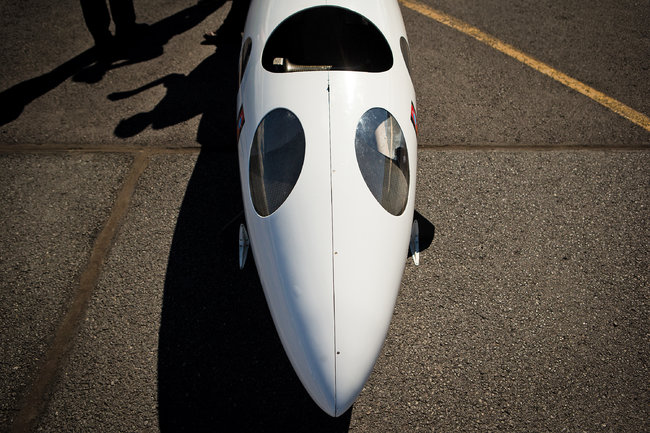 A dummy fuselage of Perlan II, a sailplane designed to reach a record altitude. The flight is scheduled for August 2015.

Perlan II will cost an estimated $7.5 million, of which $3.5 million has already been spent; the project is still trying to raise the balance. The organizers include Dennis Tito, the pension fund manager who paid $20 million to visit the International Space Station, and, until he was killed in the 2007 crash of his single-engine plane, Steve Fossett, the aeronaut and sailor who flew Perlan I.

Perlan I also used the Andes mountain uplift; the climb took about four and a half hours. The new sailplane will have a wingspan of 84 feet and weigh just 1,700 pounds, counting crew — 100 pounds lighter than Perlan I, even though the older plane had a 72-foot wingspan. The builders say Perlan II is 80 percent complete. Huge carbon-fiber pieces that look like a woven fabric, a tight-knit plaid in two shades of gray, fill most of a hangar, waiting to be glued together.

In the end, all will be painted a reflective white to stop the sun from heating the parts enough to weaken the epoxy. (Inside the cabin, though, the air will be near freezing.)

The glider was designed partly by computer calculation and partly by intuition. Long wings with a short distance from leading edge to trailing edge have low drag, essential in a plane with no engines. But as the wings get longer, the bending forces become greater, so the wings require a stiffer internal spar, which adds thickness. And thicker wings have a harder time cutting through the air.

“You’re always working trade-offs,” said Einar K. Enevoldson, the founder and chief pilot of the project, who was Mr. Fossett’s co-pilot on the record-breaking flight.

Mr. Enevoldson has been flying gliders since 1947, when he was 15 years old, and has extensive experience in high-altitude fighters and research planes. Now he is 81. His reflexes are not the same, he said, but his judgment in the tricky business of finding the uplifts is still good.

The glider’s design is a trade-off of performance and safety. Above 50,000 feet, the air pressure is so low that a pilot would find it impossible to exhale, even with an oxygen mask. One solution is a pressure suit, but it would be too big for a glider built to climb so high.

The glider’s system will be tricked by the thin atmosphere into showing an airspeed of 46 miles an hour, about what it needs to stay aloft. But for the speed indicator to get to that reading in such low-density air, the actual speed will have to be about 335 m.p.h.

And this, indirectly, sets the altitude limit. The challenge for the glider, as for most aircraft, is to move fast enough to get sufficient lift in the thin air to stay airborne, without approaching the speed of sound, which causes unacceptable stresses on the airframe. But as air density goes down, so does the speed of sound. On the top of the Perlan II glider’s wing, the passing air will approach the speed of sound but will not reach it.

“They’re definitely going to need to push the performance envelope, which means high lift and incredibly low drag,” said Richard P. Anderson, a professor of aerospace engineering at Embry-Riddle Aeronautical University in Daytona Beach, Fla., and a glider pilot, who is not affiliated with the project.

And the high altitude will introduce other complications.

One is the need to pressurize the cabin so human lungs can overcome low air pressure — something other airplanes do with an engine.

The solution is to seal the tiny cabin as the plane ascends, and bleed off a little air through a valve so the cabin pressure mimics what it would be at 14,500 feet. The sealed cabin needs spaceship-style scrubbers to remove the carbon dioxide and the moisture that would otherwise produce ice on the windows and walls. There is no way to warm the plane — another consequence of lacking an engine — so the two pilots, who will spell each other during the long flight, will wear socks with heaters in their soles, Mr. Enevoldson said. 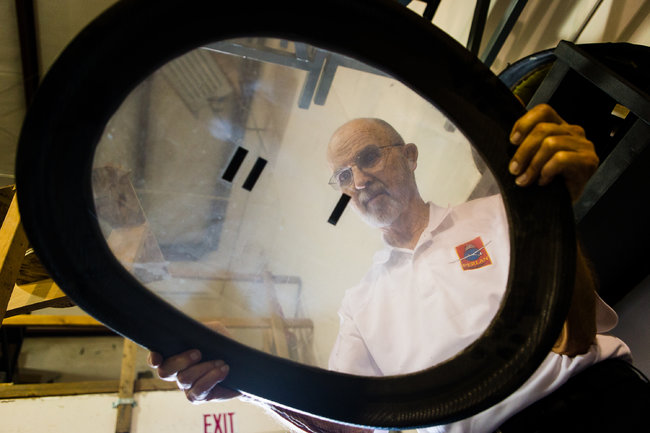 Mr. Enevoldson with one of the glider’s windows. The cabin will be sealed as the plane climbs.

Squeezed into a fuselage about 36 inches in diameter, they will be almost recumbent. They will bring sandwiches and wear diapers.

If a cabin-pressure emergency should strike at high altitude, the plane would have to dive — no simple matter in an airframe designed to glide many miles horizontally for each mile of altitude loss. The crew would deploy a small drogue parachute in the tail, point the glider’s nose down so it could fall quickly into thicker air, and then jettison the chute.

The glider will also carry a bigger, rocket-fired chute that could lower the plane to earth slowly enough for a survivable crash. Such parachutes are now in use on the Cirrus, a single-engine airplane.

The whole contraption, studded with windows cut in circles to minimize stresses on the frame, looks well suited to an otherworldly environment. “The temperature and atmospheric pressure aren’t too far off from Mars,” said Mr. Warnock, the project’s chief executive. (Mars is a special interest of Mr. Tito’s.) In fact, the engineers say, their plane would fly well in the atmosphere of Mars — if it could get there, and find a tow plane to get it off the ground.

The stratosphere is ripe for close study, scientists say. It is where the sun continuously breaks apart molecules of ozone, which is made up of three oxygen atoms. The third tends to bind with human-made chlorofluorocarbon refrigerants in the atmosphere. While those chemicals have been mostly banned, the stray oxygen atoms stay married to chlorine or fluorine for 50 years, unavailable to become part of new ozone molecules, thereby depleting the ozone layer and altering the natural balance.

Perlan II could take samples and use lasers to observe and measure concentrations of chemicals. It is also expected to provide data on how the air mixes at such high altitudes, a phenomenon that is crucial to the planet’s heat balance.

The altitude is not completely virgin territory; the space shuttle, which was in effect a glider on its way back to earth, used to traverse it at several times the speed of sound.

Spy planes like the SR-71 Blackbird have reached that altitude, but only for brief periods in their parabolic flight, according to Mr. Warnock. Perlan’s plan is to cruise for hours at a time, in peaceful silence. The U-2 spy plane — Mr. Enevoldson has flown a civilian version — tops out at a height of about 70,000 feet. (The exact number is classified.) A year ago, Felix Baumgartner reached 128,100 feet in a balloon before skydiving out, but it would be difficult to navigate a balloon into the ozone hole.

“The idea of extended observations from a platform in the 70-to-90,000 foot range has huge potential scientific advantages,” said James G. Anderson, a climate scientist at Harvard who is not affiliated with the project.

But he added that in an era of remote-controlled drones, human pilots were something of a liability. “When you start delivering mass to 90,000 feet, or even 70,000 feet, every kilogram makes a huge difference, and it either goes into the payload or into the pilot,” he said. “Even a skinny pilot is still four or five instruments.”

But that is not the point, say Perlan’s backers, who hope to inspire a new generation of aeronautical adventurers.

After all, Mr. Warnock said, “you could run the Indy 500 or the Reno air races with drones, too.” But “it wouldn’t be the same.”