WALLOPS ISLAND, VA – Catching a slim weather break amidst the monster blizzard and unprecedented arctic air low temperatures afflicting the central and northern United States, Orbital Sciences Corp. is marching forward with plans for a spectacular daylight blastoff of the firms privately developed Antares rocket and Cygnus cargo spacecraft on Wednesday, Jan. 8 from a beachside pad at NASA Wallops Island, VA – on a critical mission for NASA bound for the Space Station carrying a huge cargo of vital science experiments.

Here’s our complete guide on “How to See the Antares/Cygnus Jan. 8 Blastoff” – chock full of viewing maps and trajectory graphics (above and below) from a variety of prime viewing locations; including historic landmarks in Washington, DC., NYC, Baltimore, Philadelphia, Virginia and more.
The cold weather, daytime Antares liftoff is currently scheduled for 1:32 p.m. EST from Launch Pad 0A at the Mid-Atlantic Regional Spaceport (MARS) at NASA Wallops, Virginia.
Antares will be the 2nd of two private rockets soaring to space this week. And the path up is clear following today’s successful blastoff of the SpaceX upgraded Falcon 9 with the Thaicom-6 commercial telecom satellite.

Due to continuing extremely cold weather conditions forecast for mid week, the launch could slip a day to Thursday, Jan. 9 when slightly warmer temperatures are expected, but it looks acceptable at this time.

This flight was originally due to blastoff at night in mid-December 2013 but was postponed due to the unexpected need for urgent repairs to get the stations critical cooling system restored to full operation following a malfunction. The fixes were accomplished during a pair of pre-Christmas spacewalks by American astronauts Rick Mastracchio and Mike Hopkins, paving the way for the Antares/Cygnus rescheduled liftoff. 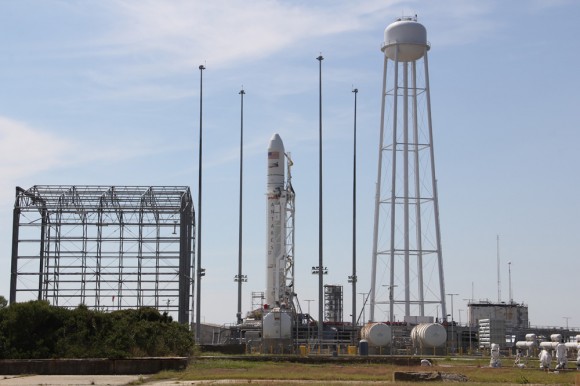 And although it’s now moved to daylight due to orbital mechanics, the two stage Antares rockets exhaust plume should easily be visible to many millions of residents up and down the US East Coast spanning from South Carolina to Massachusetts – weather permitting.

Antares will be able to be seen by spectators inland as well, reaching potentially into portions of West Virginia, western Pennsylvania and New England depending on cloud cover.

For example; Here’s the expected view from the US Capitol – for all the politicians who decide NASA’s budget as well as myriads of tourists visiting from all across the globe. 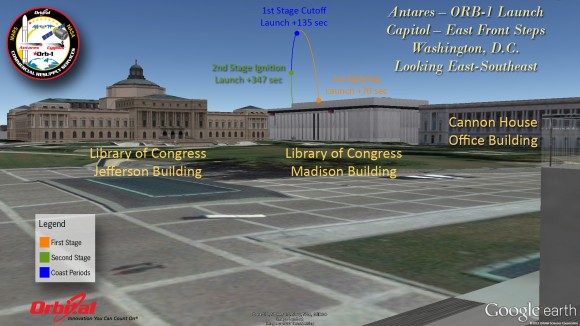 The viewing maps are courtesy of Orbital Sciences, the private company that developed both the Antares rocket and Cygnus resupply vessel aimed at keeping the International Space Station (ISS) fully stocked and operational for science research.

Up top is the time of first sighting map showing when the rocket reaches 5 degrees of elevation in the eastern United States.

If you want to imitate Rocky’s famous workout on the steps of the Philadelphia Art Museum, here’s what you’ll see: 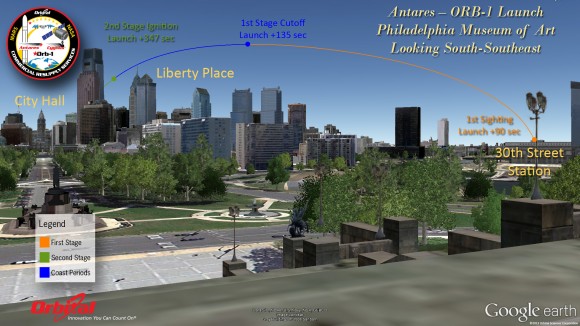 And with yet another cold arctic air mass gushing towards eastwards, its certain to be frigid in many regions – so be sure to dress warmly.

The flight is designated the Orbital-1, or Orb-1 mission.

Orb-1 is the first of eight commercial cargo resupply missions to the ISS by Orbital under its Commercial Resupply Services (CRS) contract with NASA. 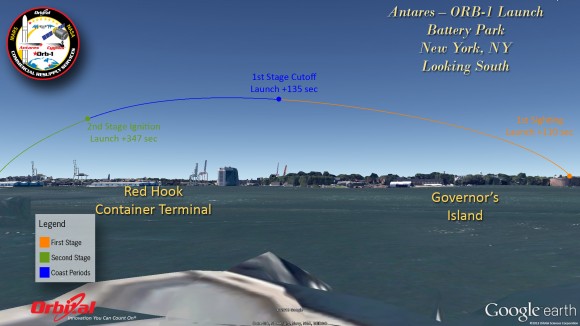 This launch follows a pair of successful launches in 2013, including the initial test launch in April and the 1st demonstration launch to the ISS in September.

So here’s your chance to witness a mighty rocket launch – from the comfort of your home from locations along the east coast. 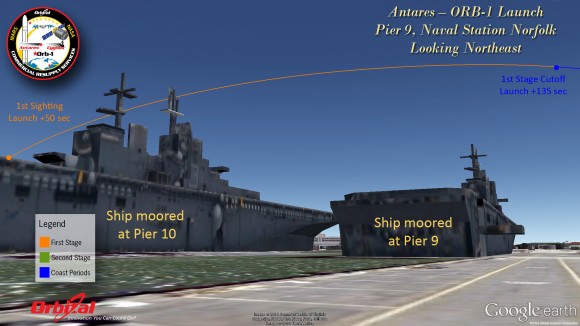 Best viewing of all will be in the mid-Atlantic region closest to Wallops Island.

If you have the opportunity to observe the launch locally, you’ll get a magnificent view and hear the rockets thunder at either the NASA Wallops Visitor Center or the Chincoteague National Wildlife Refuge/Assateague National Seashore.

For more information about the Wallops Visitors Center, including directions, see: http://www.nasa.gov/centers/wallops/visitorcenter

The rocket was rolled out to the Wallops launch pad on Sunday by Orbital’s technicians.
Cygnus is loaded with approximately 2,780 pounds / 1,261 kilograms of cargo for the ISS crew for NASA including science experiments, computer supplies, spacewalk tools, food, water, clothing and experimental hardware. 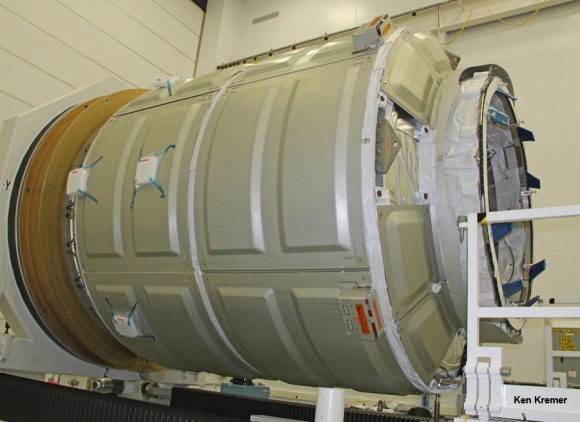 Among the research items packed aboard the Antares/Cygnus flight are an experiment to study the effectiveness of antibiotics in space and a batch of 23 student experiments involving life sciences topics ranging from amoeba reproduction to calcium in the bones to salamanders.

Of course you can still view the launch live via the NASA TV webcast.

NASA Television coverage of the Antares launch will begin at 1 p.m. on Jan. 8 – www.nasa.gov/ntv
A launch on either Jan. 8 or Jan. 9 will result in a grapple of Cygnus by the Expedition 38 crew aboard the station on Sunday, Jan. 12 at at 6:02 a.m. EDT.

Weather outlook appears rather promising at this time – 90% favorable chance of lift off.
Watch for my ongoing Antares launch reports from on site at NASA Wallops.

By: Ken Kremer
To view the original article CLICK HERE 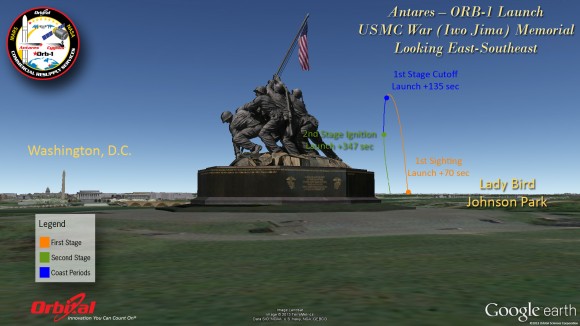 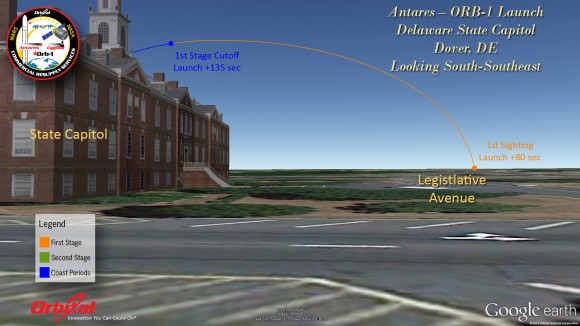 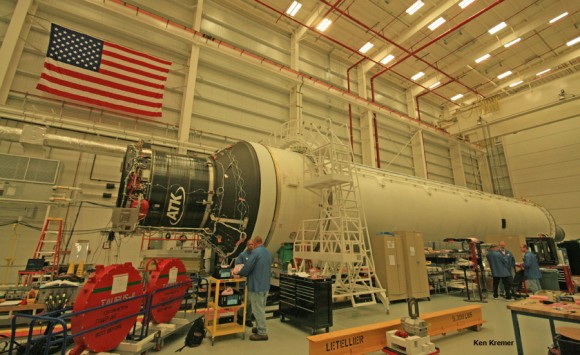