Spacewalking cosmonauts Oleg Kotov and Sergey Ryazanskiy carried out the first Olympic torch exchange in the vacuum of space Saturday. The ceremonial gesture outside the International Space Station kicked off a near six hour spacewalk devoted primarily to the outfitting of an external work station on the orbiting lab’s Russian segment.

The ceremonial activities went well, but other tasks proved problematic and went unfinished.

Installation of the work station began with a late August spacewalk. On Saturday, the spacewalkers added handrails and a camera mount on the platform outside the Zvezda service module. The installation of high resolution optical cameras on the platform is scheduled for a December excursion by Kotov and cosmonaut Mikhail Tyurin.

The outfitting of the camera mount required the removal of a restraint used to secure the multi-axis pointing mechanism as it was launched. The last of three bolts holding the restraint offered unexpected resistance but finally yielded to the spacewalkers. 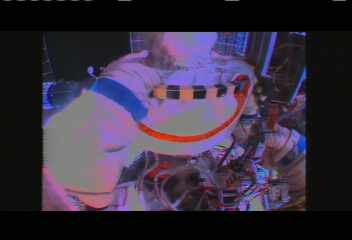 The two men labored to position the foot restraint and were ultimately instructed by Russia’s Mission Control to return the spacewalking aid to the Pirs airlock for installation on a future spacewalk.

Kotov and Ryazanskiy also attempted to deactivate an external radiometric antenna, the RK-21, installed outside the station in 2011 to remotely monitor seismic activities on the Earth for the forecasting of earthquakes. When they encountered a balky latch that prevented them from folding up the antenna, Russian controllers told them to re-deploy the device so it can be retracted on another outing. The spacewalkers, however, managed to disconnect and stow utlity cables associated with the antenna.

The photo session with the unlit torch consumed just over two hours of Saturday’s excursion, which got under way at 9:34 a.m., EST. Kotov and Ryazanskiy characterized the ceremonial exchange as a symbol of cooperation, friendship and competition as they sailed 258 miles over the Atlantic Ocean toward the coast of Africa. The ISS major partners include Canada, Japan and the European Space Agency as well as the United States and Russia — or 15 countries in all, and all of them Olympic competitors.

“Do not be in a hurry. Take your time,” Russia’s Mission Control coached the spacewalkers as they began the elaborately choreographed Olympic activities. It was a request flight controllers would repeat throughout the spacewalk as Kotov and Ryazanskiy worked to overcome the obstacles.

The torch, which reached the ISS early Thursday aboard the Soyuz TMA-11M capsule with Tyurin, Rick Mastracchio and Koichi Wakata, is to return to Earth late Sunday aboard the Soyuz TMA-09M crew transport with Fyodor Yurchikhin, Karen Nyberg and Luca Parmitano. The Russian, U.S. and European trio is ending a 5 1/2 month tour of duty aboard the orbiting science lab with a descent into Kazakhstan.

The space torch will then make its way to Sochi for the Feb. 7 opening of the Russian hosted Winter Games. It will be used to light the Olympic flame, concluding a long journey for a collection of Olympic torches that began in Olympia, Greece.

With the departure of Yurchikhin, Nyberg and Parmitano, ISS staffing will return to its normal six personnel. Command will transfer from Yurchikhin to Kotov as well for Expedition 38.