Concerned a rocket launch might add more congestion to the skies during Thanksgiving week, federal regulators blocked SpaceX’s bid to launch a commercial broadcasting satellite Tuesday and Wednesday, two of the busiest travel days of the year

SpaceX scrubbed a launch attempt Monday after a litany of technical problems triggered holds in the countdown, but instead of having another chance to launch Tuesday, the company had to stand down until Thursday.

The Falcon 9 rocket is poised to send the SES 8 television broadcasting satellite into orbit on the first commercial communications satellite launch from the United States since 2009.

The Federal Aviation Administration, which grants licenses for commercial space launches in the United States, would not approve SpaceX launch attempts Tuesday or Wednesday.

“We were unable to approve the use of the national airspace system for launches on Nov. 26 and Nov. 27 because they are the two heaviest air travel days of the year,” said Hank Price, an FAA spokesperson.

Price did not respond Tuesday when asked if the FAA had denied launch providers access to airspace during previous periods of busy travel.

The region closed off to civilian airliners and private planes covers about 1,500 square miles, larger than the state of Rhode Island, according to the boundaries of a temporary flight restriction released by the FAA. 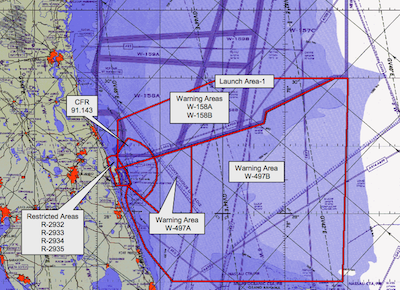 A map of restricted airspace for the Falcon 9 launch released by the U.S. Air Force 45th Space Wing. The “warning areas” offshore are in international airspace and outside of the FAA’s jurisdiction, while aircraft are prohibited from flying in the regions labeled “CFR 91.143” and in the “restricted areas” over land.

“Commercial air travel restrictions are probably too extreme in terms of geographic area and time and should probably be reexamined,” Musk said. “The current situation is not practical for frequent spaceflights.”

Officials with SpaceX and SES, the Luxembourg-based operator of the Falcon 9’s payload, said Tuesday that the rocket is on track to support a Thanksgiving launch date after the booster was lowered horizontal to resolve issues encountered during Monday night’s countdown.

The work includes repairs to the first stage’s liquid oxygen pressurization system, and technicians are reconnecting an air conditioning duct to the Falcon 9’s payload fairing that popped off just before Monday’s scrub.

The duct supplies air inside the Falcon 9’s nose shroud, which encloses the SES 8 satellite. Officials said the spacecraft was safe.

The officials said there is a backup launch opportunity Friday, but the FAA may ban launch attempts over the weekend, particularly on Sunday, another busy day for air travel in the United States.

The FAA governs the nation’s civil airspace, but the agency only issues licenses for commercial launches like SpaceX’s Falcon 9 flight.

Government space launches have occurred on busy air travel days in the past, but not on the day preceding Thanksgiving since a space shuttle mission took off Nov. 22, 1989, on the eve of the holiday.

Two years ago, NASA’s Curiosity rover launched aboard a United Launch Alliance Atlas 5 rocket on the Saturday after Thanksgiving as travelers returned home after the holiday.

In 2009, the space shuttle Atlantis landed at the Kennedy Space Center on the Friday morning after Thanksgiving. Shuttle landings also required airspace closures.

There has not been a Thanksgiving Day launch from Cape Canaveral since 1959, when an Atlas-Able launch vehicle lifted off with the Pioneer P-3 lunar probe. The mission ended in a launch failure.

The last Thanksgiving launch from U.S. soil occurred in 1991 from Vandenberg Air Force Base in California, when an Atlas E rocket successfully lofted an Air Force weather satellite into orbit.

By: Stephen Clark
To view the original article CLICK HERE